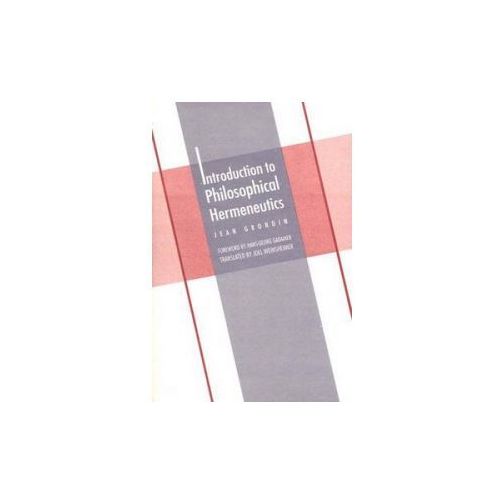 In this historical introduction to philosophical hermeneutics, Jean Grondin discusses the major figures from Philo to Habermas, analyzes conflicts among various interpretive schools, and provides a persuasive critique of Gadamer's view of hermeneutic history, though in other ways Gadamer's "Truth and Method" serves as a model for Grondin's approach. Grondin begins with brief overviews of the pre-19th-century thinkers Philo, Origen, Augustine, Luther, Flacius, Dannhauer, Chladenius, Meier, Rambach, Ast, and Schlegel. Next he provides more extensive treatments of such major 19th-century figures as Schleiermacher, Bockh, Droysen, and Dilthey. There are full chapters devoted to Heidegger and Gadamer as well as shorter discussions of Betti, Habermas, and Derrida. Because he is the first to pay close attention to pre-Romantic figures, Grondin is able to show that the history of hermeneutics cannot be viewed as a gradual, steady progression in the direction of complete universalization. His book makes it clear that even in the early period, hermeneutic thinkers acknowledged a universal aspect in interpretation that long before Schleiermacher, hermeneutics was philosophical and not merely practical. In revising and correcting the kanon account, Grondin's book is not merely introductory but revisionary, suitable for beginners as well as advanced students in the field.
Obserwuj cene

Susan Sontag, one of the most internationally renowned and controversial intellectuals of the latter half of the twentieth century, still provokes. In 1979, Jonathan Cott, a founding contributing...

In December 2013, David Satter became the first American journalist to be expelled from Russia since the Cold War. The Moscow Times said it was not surprising he was expelled, &#34;it was...

Philosophy begins with questions about the nature of reality and how we should live. These were the concerns of Socrates, who spent his days in the ancient Athenian marketplace asking awkward...

For curious readers young and old, a rich and colorful history of religion from humanity&#39;s earliest days to our own contentious times In an era of hardening religious attitudes and explosive...

The First Authorized Copy Of This Mysterious, Much-speculated-upon, One-of-a-kind, Centuries-old Puzzle. The Voynich Manuscript Is Produced From New Photographs Of The Entire Original And...

In the face of the most perilous challenges of our time - climate change, terrorism, poverty, and trafficking of drugs, guns and people - the nations of the world seem paralyzed. The problems are...

The definitive history of Austria s multinational army and its immense role during three centuries of European military history&#34;

Written in the spirit of Ovid, this lively and erudite book traces the art derived from Ovid&#39;s Metamorphoses from the Renaissance up to the present day. The Metamorphoses has been more widely...

The definitive history of the supernatural in Nazi Germany, exploring the occult ideas, esoteric sciences, and pagan religions touted aby the Third Reich in the service of power.The Nazi...